We are contacting Waverley Tennis clubs that currently do not

participate in our competition, to ask if your ladies would like to

consider our Waverley District Midweek Ladies Competition as either an

alternative option to your current Thursday comp for a bit of variety,

or perhaps adding an extra day to their current tennis commitments.

We also have a Pool Emergency List. If you have any ladies that can?t

form a team, but are interested in playing on a Thursday as an

emergency, we would love to hear from them.

Home and Away Thursday Competition

2 Seasons per Calendar Year (Feb to June / July to Dec)

Starting times vary from 9.30 am

6 doubles sets per match – no rubbers

Sets are first to 8 games – tiebreak at 7 all

No umpires in finals.

Our next competition commences 6th February 2014, and entries are

We hope your Club will consider participating.

If you require any more information, or some team entry sheets/cards, do

Congratulations to our EDWTA team who made it back to back to back titles after they won the Premiership in Section 5 for the Summer season.

The team pictured below of Viv Saheley, Steph Gibson, Faye Norton Old and Sue Reid played the Grand Final against North Balwyn and won the day 43 games to 27.

Other regular team members for the season included Robyn Brasher and Maria Diamond. They now move up to section 4 and more great tennis in the Winter season. 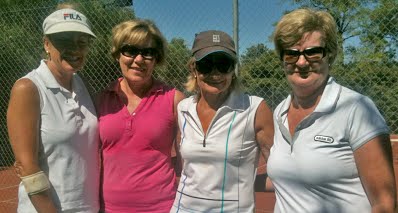 Congratulations to our EDWTA team who made it back to back titles after they won the Premiership in section 5 for the Winter Season.

The team of Karen Saunders, Faye Norton-Old, Viv Sahely, Robyn Brasher and Sue Reid are running out of wall space as they collect Grand Final pennants. 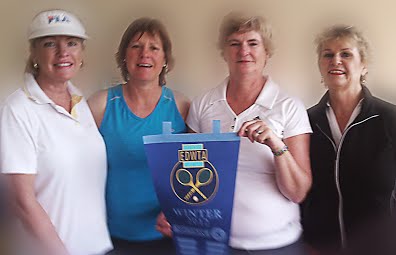 Congratulations to our EDWTA team which won their Grand Final in the Summer 12/12 season in section 5. 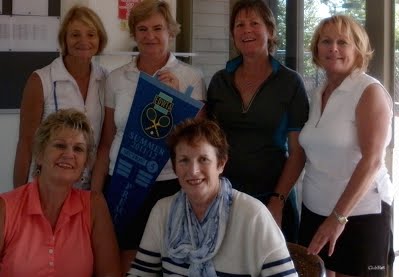 “Our Lady of Victory” East Malvern next Wednesday.

Hopefully East Malvern will have to change their name to  ” Our Lady of close Losses” next Wednesday.

Congratulations to our Mid Week ladies EDWTA section 5 team, which finished 4th in the home and away season and will play its semi final match against Chadstone next Wednesday.

Congratulations to our MEMRLTA B2 team on a great victory in the Grand Final today. 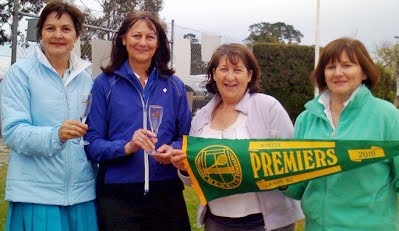 We had three teams playing MEMRLTA this season.

B3 (Captain Cathy Blazey) have won their semi final and go on next week to play in the final.

A10 which didn’t have a good season unfortunately finished near the bottom of the ladder and had to umpire the semi final at the South Hawthorn courts,  A8 had a disasterous semi final and now have the dubious honour of umpiring at the finals next week.  There is always next season when again the three teams will participate.

Barbara Castles has taken the role of Women’s convenor. Her role will be to keep track of who plays during the week and if there are any teams that can include new players in their groups. We thank Barbara for taking on this important role.

Congratulations to our MEMRLTA team who having won the Premiership last season in section A9, were promoted to section A8 and have won that section as well. We look forward to reporting on their progress in section A7, like fine wine they just keep getting better.