MVP awards were presented for each team as well as long service awards for players who have played 8 seasons of Junior tennis. Congratulations to Yamina Perry and Rowan Solomon.

Also presented were our two major awards for juniors, the Bascomb Trophy for girls and the Don Mann Trophy for boys.

Congratulations to Yamina Perry who won the Bascomb and Nicolas Alexiou who won the Don Mann. 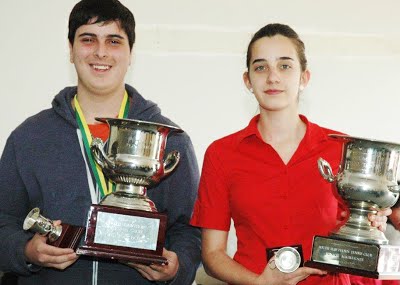 The club thanks Bronwyn for all her efforts as Junior Convenor for the past 3 seasons. She has done a fantastic job organising and communicating with all our teams and players. The club continues to have solid numbers of teams and busy courts every weekend. The club appreciates the efforts of all its volunteers and the Junior Convenor is one of our most important roles. Bronwyn was very generous in taking on the role over an extremely busy time for her.

The Summer season of Junior Tennis finished with a Presentation day on the 24th March. Awards were presented for MVP’s from all teams along with the major trophies for our Junior Players.

These awards are made to players who have represented the club for at least 5 seasons and have made a significant contribution to competition tennis at our club. This season’s winners were

The club held it’s junior presentation day recently to present awards for MVP’s and the Bascomb Trophy for girls and the Don Mann trophy for boys.

The following Juniors won MVP award for their teams.

Each Season the club presents the Bascomb Trophy for girls and the Don Mann trophy for boys to players who have represented the club over a number of seasons displaying both a high standard of tennis and behavior.

Mvp for the BBQ went to Tony El Helou who provided a feast for those who attended another very successful day.

Thanks to Bronwyn Burgess who has been doing a fantastic job as Junior Convenor and organised the day with help from Sylvia Stuart, Dylan Edgley and Sue Davey.

Thanks to Sylvia and David Stuart and John Best for organising a successful pizza night last Friday.

A good number of juniors came along for some round robin singles, along with pizza, and other treats. The night was free for our competition players.

junior social nights of the past, when Sue did all the organising and Dylan was a participant.

These nights are a great way for our members and their parents to speak to Dylan and Sue in a relaxed way off the court, about how to get the most out

We look forward to more social nights in the future.

Thanks to Jenny Donald for organising the junior Summer season presentation on the weekend.

A good crowd assembled to hear the award winners for the season.

She also thanked Peter Smart who has been very generous in setting up our online payment system for junior competition registration.

Jenny thanked the team managers from the Summer season and asked for any volunteers for next seasons roles.

Jenny and Sue Davey then made the presentations to the seasons MVPs.

The MVPs for the Summer 2011 season were: 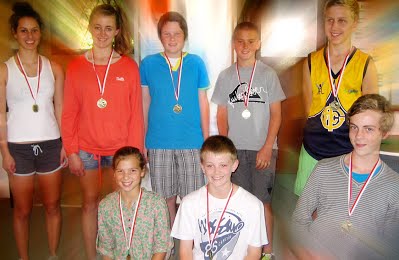 Jenny then awarded South Hawks “Black Hats” to players who have played 8 seasons of competition tennis at South Hawthorn. You will know when you see someone wearing a black South Hawks hat, that they have made a significant contribution to tennis at our club.

This seasons “Back Hat” receipients were

Finally the Club presents two major trophies at the end of each season. The Bascomb Trophy for girls and the Don Mann Trophy for boys.

These represent the highest achievment for a junior at South Hawthorn and are awarded to juniors whose ability and behaviour are outstanding.

This seasons winners were

Adult and Child Round Robin

Presentation to Cynthia at 1pm,

followed by a sausage sizzle.

Round robin to start at approx. 2pm

BYO other drinks and food.

Players remember to bring your own water bottle

Please register your interest for the round robin by emailing Sylvia Stuart at destuart@bigpond.net.au or ringing on 0416152236.

Thanks to Jenny Donald and Sylvia Stuart for organising the junior Winter season presentation and round Robin on the weekend.

A large crowd assembled to hear the award winners for the season and stories from the Grand Finals played on the weekend.

Jenny Donald then announced the results from the weekends finals, with four teams playing off in Grand Finals and our section 5 Sunday boys team winning the pennant.

The MVPs for the Winter 2010 season were: 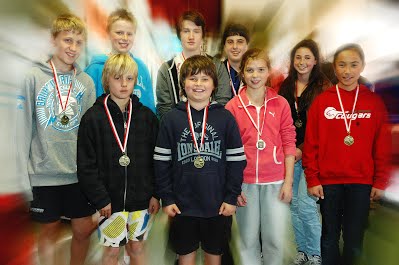 The Club presents two major trophies at the end of each season. The Bascomb Trophy for girls and the Don Mann Trophy for boys.

These represent the highest achievment for a junior at South Hawthorn and are awarded to juniors whose ability and behaviour are outstanding.

This years winners were

Once again the presentations were followed by a parent child round robin on all four courts and a large number of families took part.

Parents were meant to just keep the ball in play for their partners, although some may have put just a little something on their shots to try to help out.

The club provided drinks and sausages, for afternoon refreshments, abley cooked by volunteers.

Unfortunately the Junior Pizza and tennis night had to be cancelled due to the rain on Friday. It will be rescheduled for some time in term 3 so look out for notices at the club and on the website.

The club had a fantstic day yesterday with the summer season presentation day and junior competition social day.

Thanks to Sylvia Stuart, Jenny Donald for organising the day.

The club awarded “black hats” for the first time, to juniors who have played 8 seasons of competition for the club. When you see kids wearing the black South Hawks hats, you will know they have made a long term commitment to junior tennis at South Hawthorn.

Finally the club presents each season, the Bascomb trophy for girls and the Don Mann trophy for boys, to players who have made a significant contribution to junior tennis at South Hawthorn. This is the highest achievment in junior tennis at our club.

This seasons winners were :

The presentations for our MVP’s and major trophy winners, were followed by a round robin and sausage sizzle, with the biggest attendance for a club function in years. 17 pairs played in the round robin with kids from beginners to our more experienced juniors. Some of the kids even preferred to play with other juniors, rather than their parents!!

Many thanks to the club for providing a sausage sizzle ( beautifully cooked by Michael Gonzales ) and prizes to the best team from each court.

Congratulations to Sarah and Alex Robinson, Richard and Angus Jones, Miranda Stuart and Matt Clearihan and Alistair Graham and Corey Perkins, who each received a sleeve of balls and a prince bag.

Thanks to Jenny Clearihan, Sylvia Stuart and Michael and Penny Gonzales, for organising the afternoon.

Congratulations and good luck to all the teams who will be competing in grand finals this weekend.

This includes Saturday GSD 1 and Sunday teams BSD 1 and GSD 1.

Don’t forget about the presentation afternoon at the clubhouse next Sunday the 21st at 3.00 (not 3.30 as previously reported) to be followed by an adult/child round robin and then a free sausage sizzle. Hope you can make it. New junior comp. players have also been invited. The aim is to get to know the others in the club and have fun and adults are there to keep the ball in play (when they can!). Thanks to those who have already replied. We would like to have an idea of numbers for catering purposes but it is not essential.

Some club hats and clothing will be available for sale and for perusal with a view to ordering at the presentation afternoon.

Junior Convenor (until the end of the season)

On the 8th of November the club hosted the first parent child tennis afternoon of the season.

A huge thank you to Michael Gonzales and Sylvia Stuart for organising a great day. Despite the hot weather we had at least 40 kids and parents taking part in a round robin of tennis.

Thanks also to Cynthia Doerner and Sue Davey for coming along and organising some great prizes and give aways from Prince and Head.

Thanks also to Phil from Reynolds racquets for coming down and providing demo racquets and a mini pro shop for us to see what they can provide.

Congratulations to the best performed kids from the 4 pools.

Thanks to all who contributed to a great day. Don’t miss out on the next one!!